In the same way that individuals have implemented bookplates to show ownership and deter theft, institutions like Slippery Rock University have also used the craft.

Each example illustrates not only the University’s era, but also the nature of library science and academia as technologies and demographics continue to change.

This bookplate found in Mary Naple's St. Nicholas v.42, contains a list of library regulations, dates between 1889 and 1935. The rules have not changed much, with the exception of the second: only having one book out at a time. True to that era, books were expensive and the library had a much smaller selection than it has today. Starting in 1935, Dr. Charles Miller was the first administrator to hold the title of "president." Before that time Slippery Rock Normal School had “principals.” 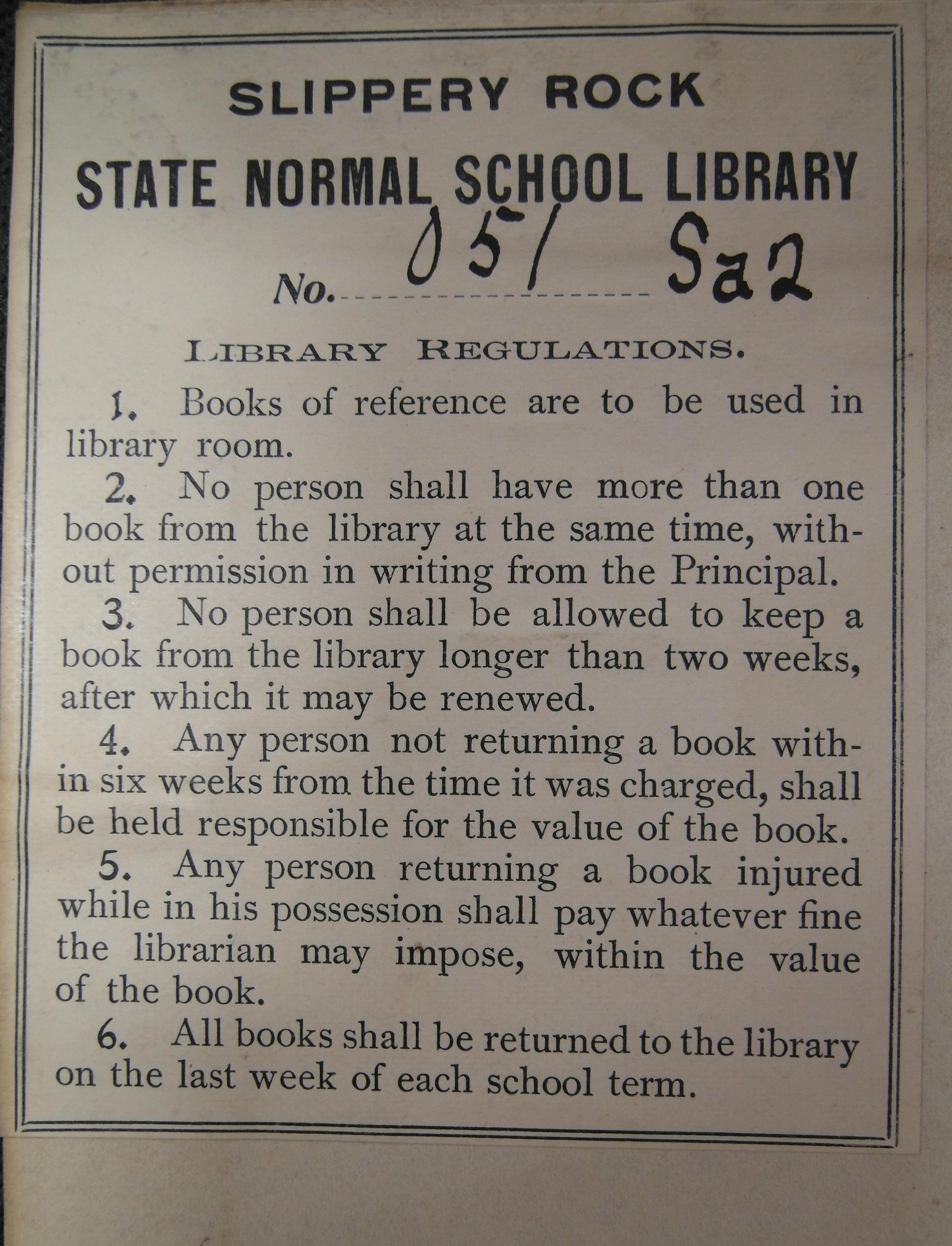 Also belonging to Mary Naple's St. Nicholas series, this illustrative bookplate takes on a much more imaginative and creative take on ownership. The State Normal School Library name floats within a cloud coming from the genie's lamp, possibly suggesting that the school and the library was where dreams and wishes were to come true. 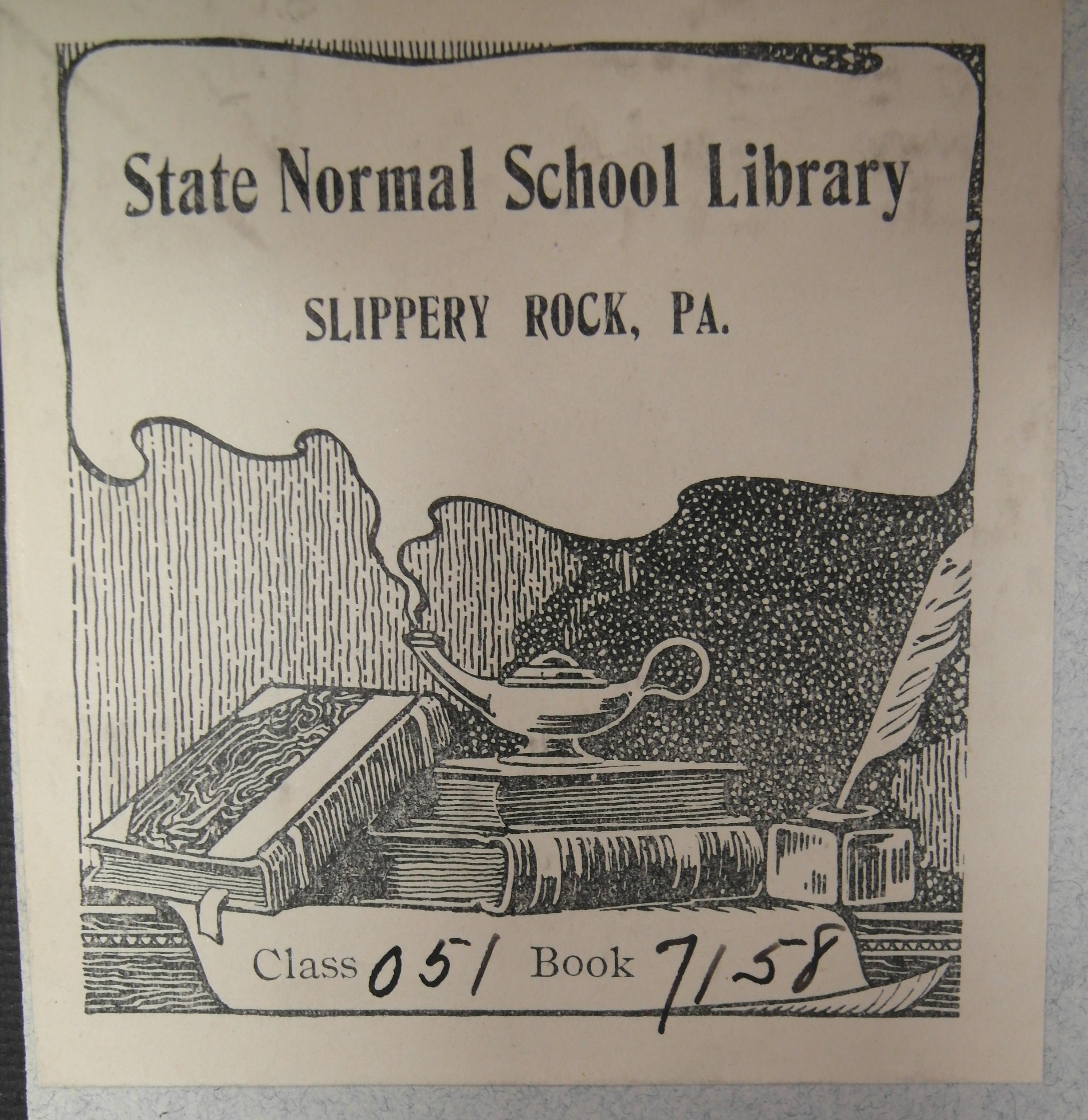 A Gift from a Past President

Also serving as a memorial and marked as a gift to the University, Ellsworth Colling's An Experiment with a Project Curriculum has provenance with President Dale McMaster. McMaster served during the Slippery Rock State Normal School era, from 1940 until his death in November of the following year.

This bookplate also differs from the University’s current design, as it incorporates illustrative pictorials (lamp and book) instead of the modern, official crest known today. 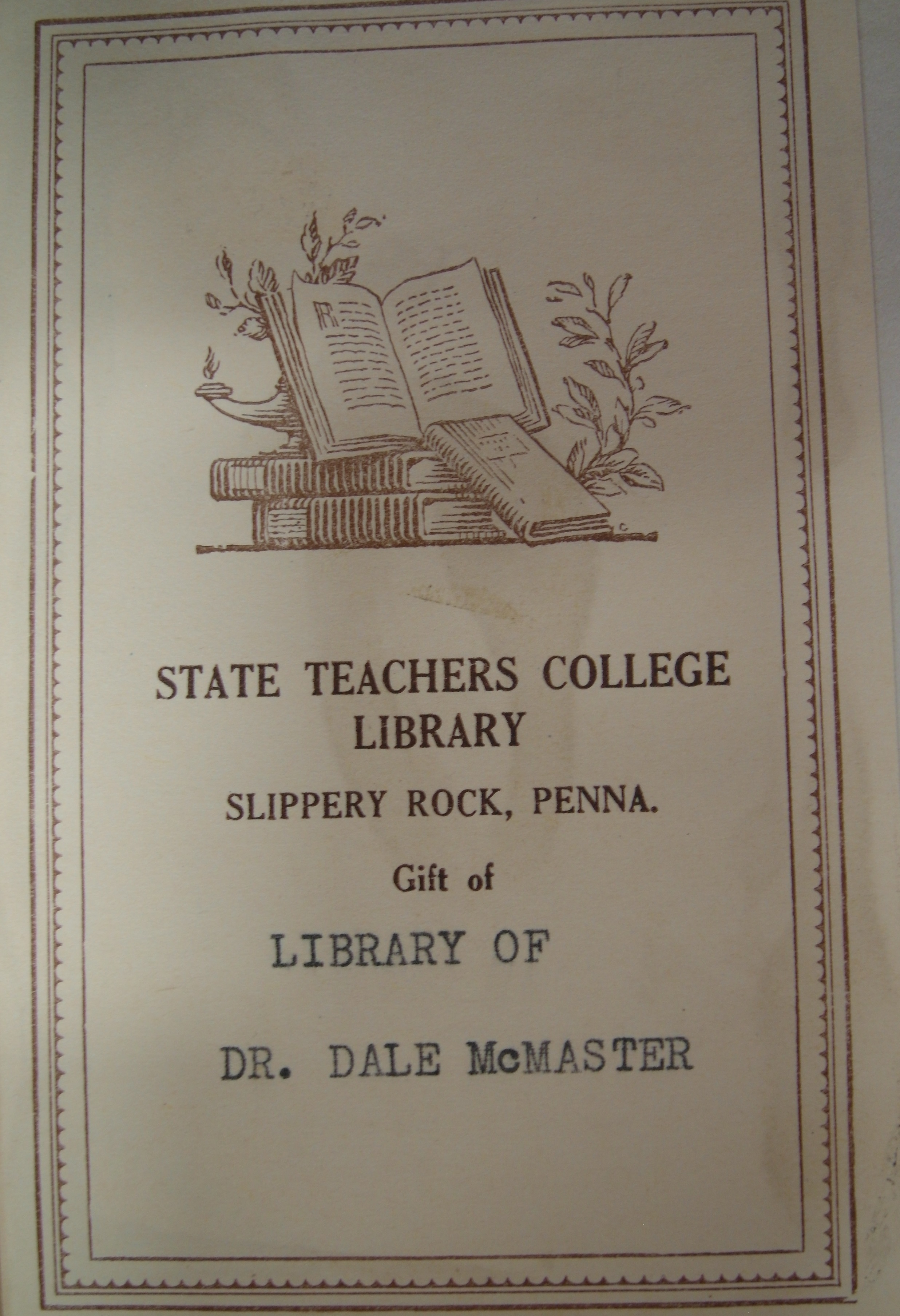 Another Bookplate From State Teacher's School

Blending an illustration of a quill dipped in ink with the name of Slippery Rock State Teachers College Library, this bookplate was discovered in the 1936 copy of Little James Heenry by Ellis Credle and serves as another example of how bookplate eras may blend into one another. 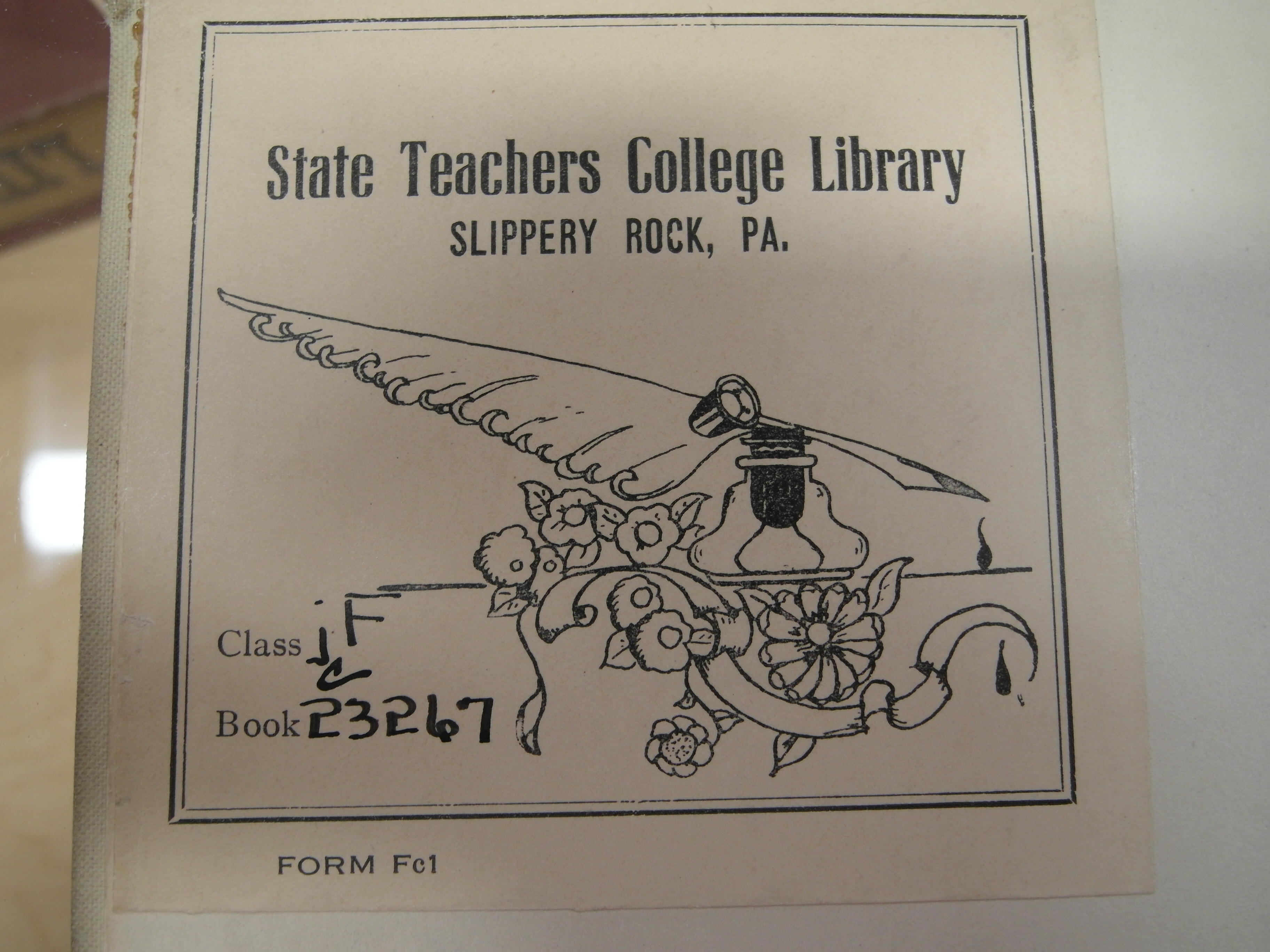 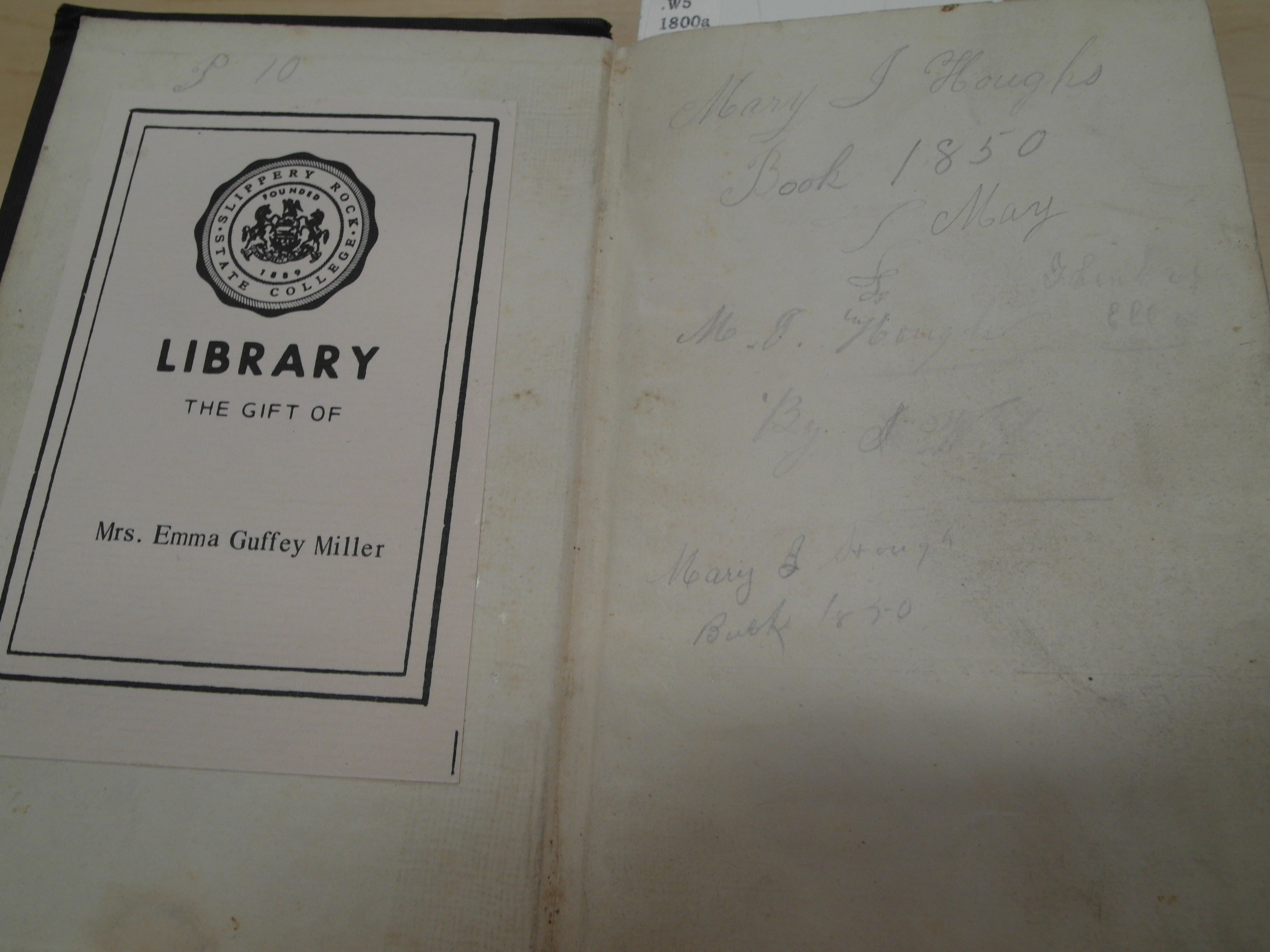 This copy of The Beulah Romance; A History of the Beulah Presbyterian Church by George Taylor, features the Slippery Rock State College seal. The book apparently belonged to “Mary J. Houghs” in 1850 before being passed on to SRU Trustee and Democratic delegate, Emma Guffey Miller.

After Miller's death, some of her books and papers came to Slippery Rock University, with the majority going to the Arthur and Elizabeth Schlesinger Library on the History of Women in America. The bookplate, then, acts as a memorial and receipt of her gift, forever capturing her enduring relationship with SRU.