Emerging from the 16th century and out of medieval knighthood, Coats of Arms (typically Armorial) were used by members in high economic, social, or lordship/gentleman status. Granted to them by governing parties, each coat of arms identified the individual and their accomplishments. Occasionally, the design was permitted to be passed down through subsequent generations, allowing the honor and family name to be tracked throughout time. Typically, the design itself contained representations of the owner’s heraldic roots, geological location, accomplishments, honors, and overall identity through chosen, traditional elements such as the well-known shield, crest, and helm. Re-worked symbols like the crown, helmet, lion and motto were also common and remain so today.

A Coat of Arms for a Scottish Clan

With his bookplate and personable signature marking ownership of this 1811 copy of The Criminal Recorder (...), “Hugh W. Diamond” also utilizes the traditional elements found in coats of arms. 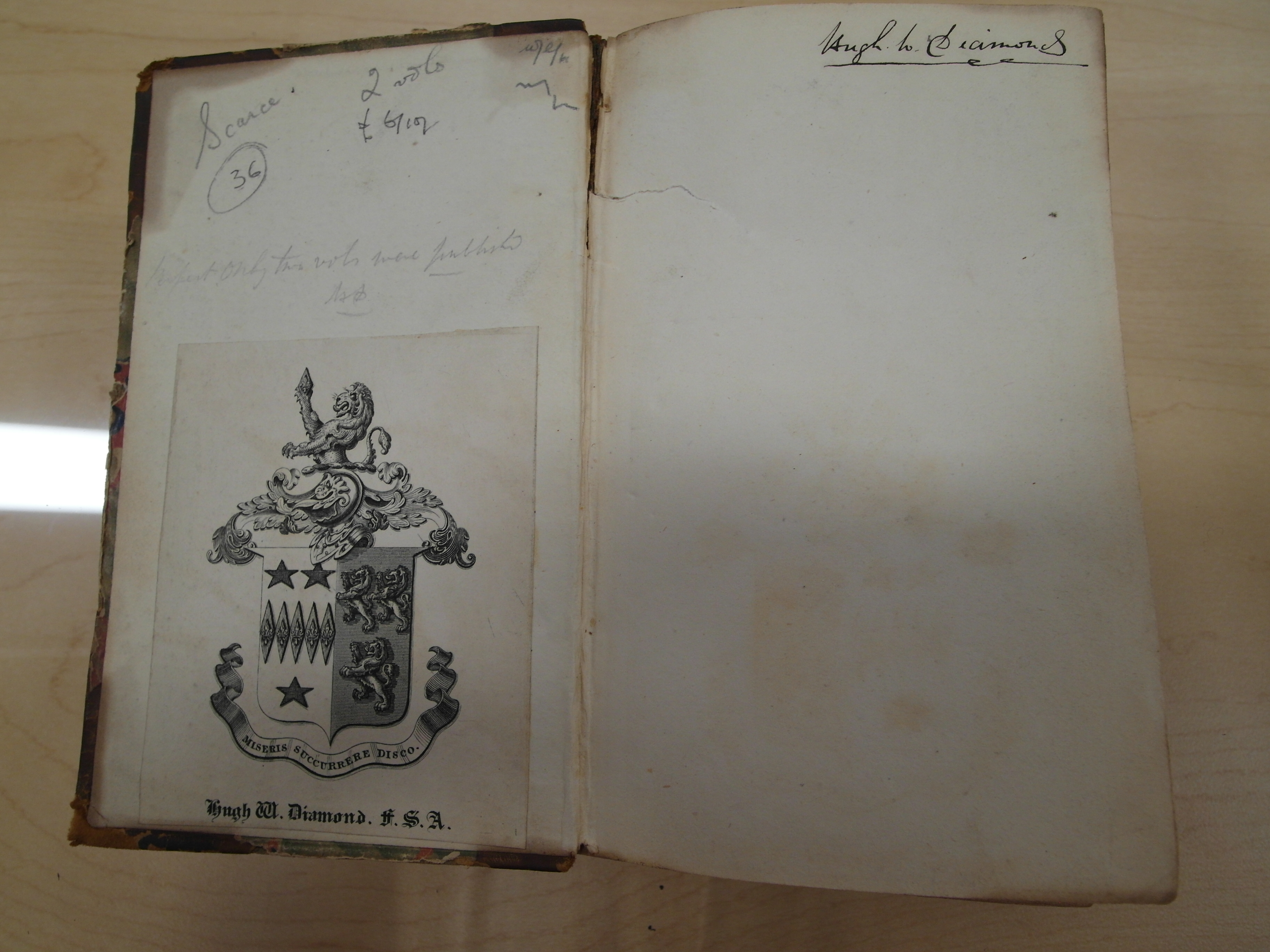 Sporting rearing lions and stars, Diamond also incorporated the motto, “Miseris Succurrere Disco” or, “I learn to succor the distressed” into his bookplate. Both this phrase (borrowed from the Roman poet, Virgil) and Diamond’s specific symbolism largely belong to the 800-year-old Scottish organization, Clan MacMillan. However, this is not surprising as many times a coat of arms also identifies an organization to which the individual subscribed. In this case, we can assume that the text’s provenance includes Diamond and his involvement in the clan. 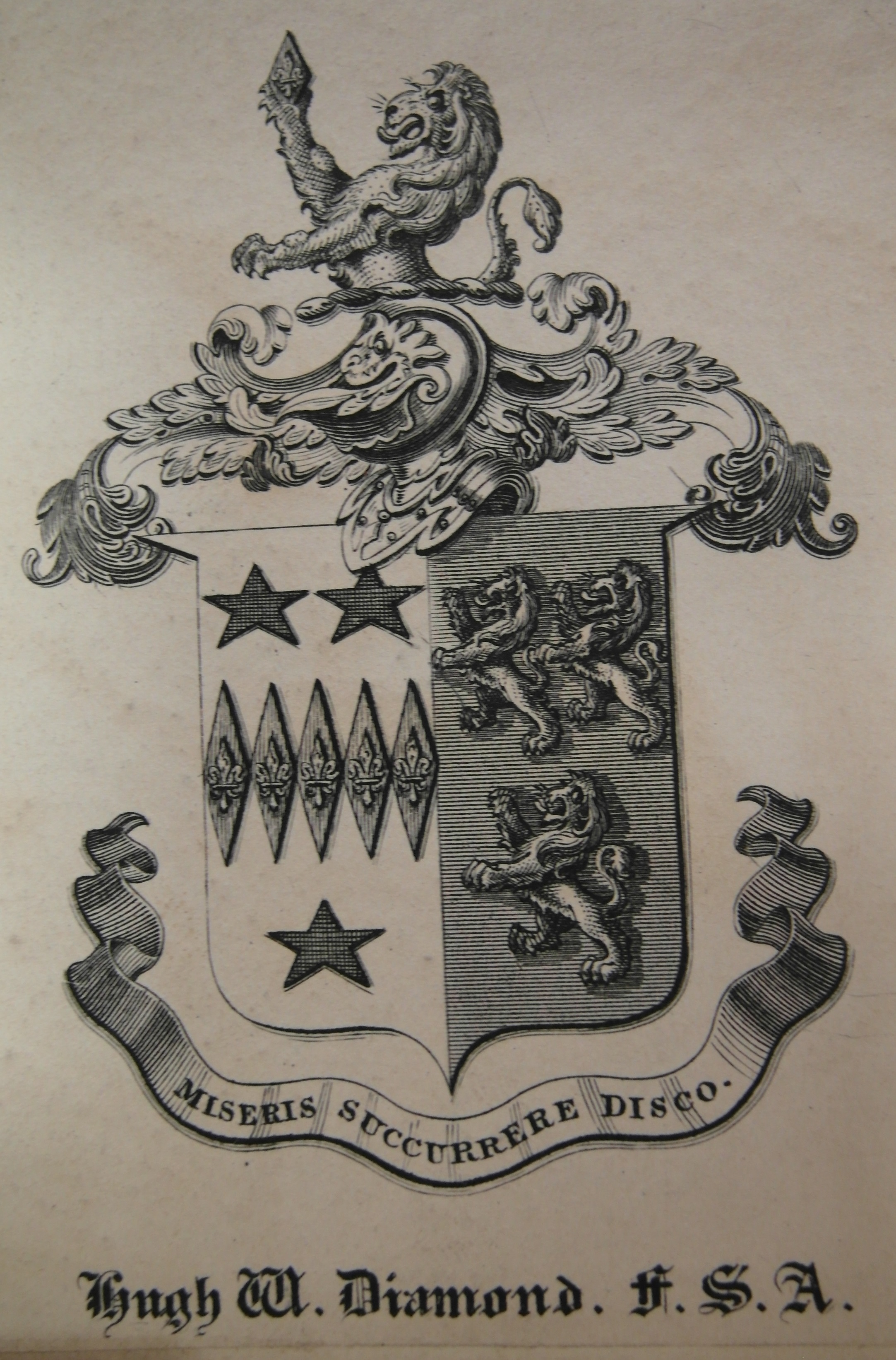 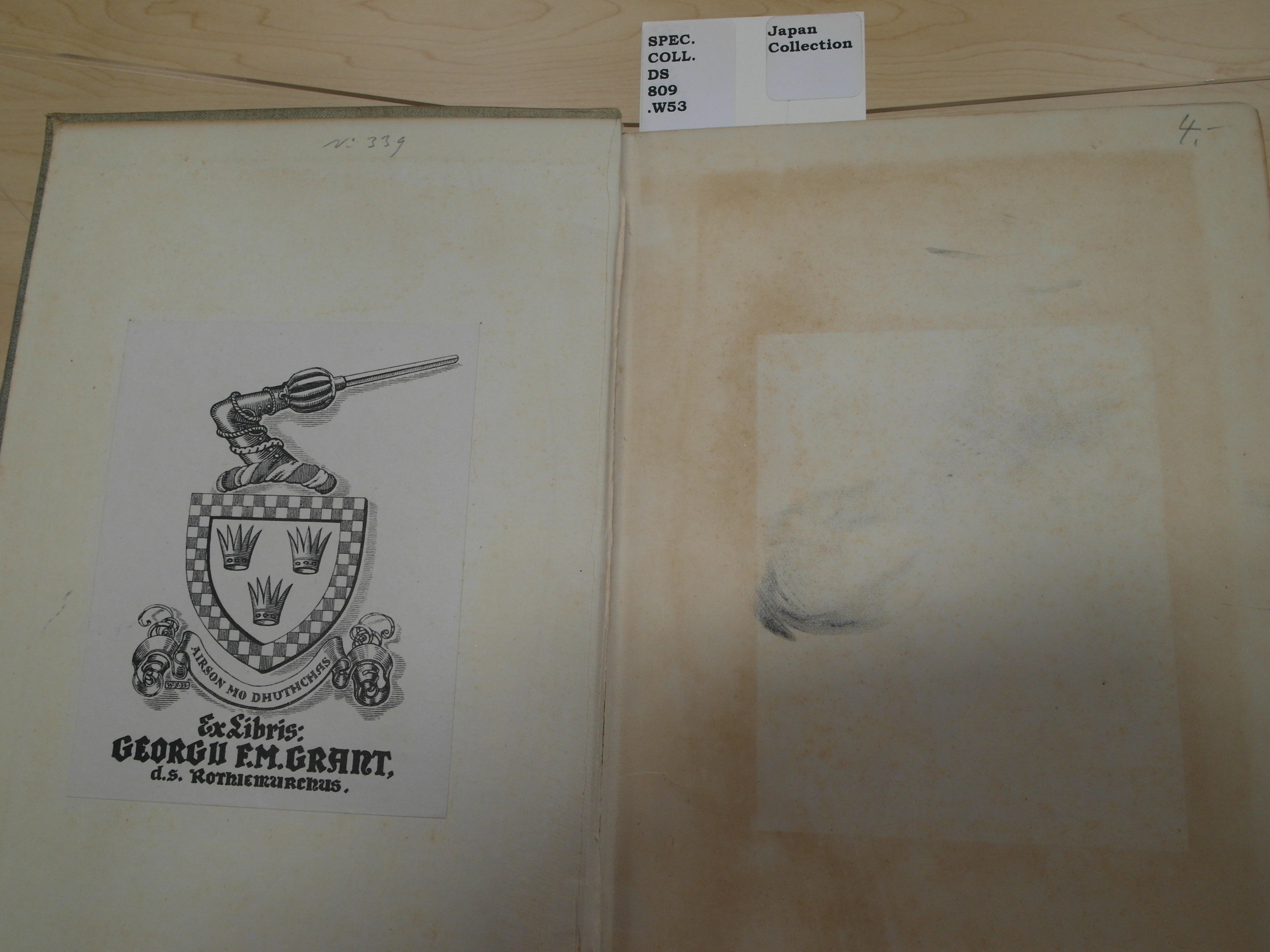 Discovered in Walter Weston's Mountaineering and Exploration in the Japanese Alps, this Gaelic bookplate and coat of arms seems to have belonged to “Georg II F.M. Grant.” With the motto, translating to “Our place, our people, our livestock, our forest, our visitors” this coat of arms also denotes “Rothiemurchus,” a remnant of the Caledonian Forest near the Scottish Highlands. 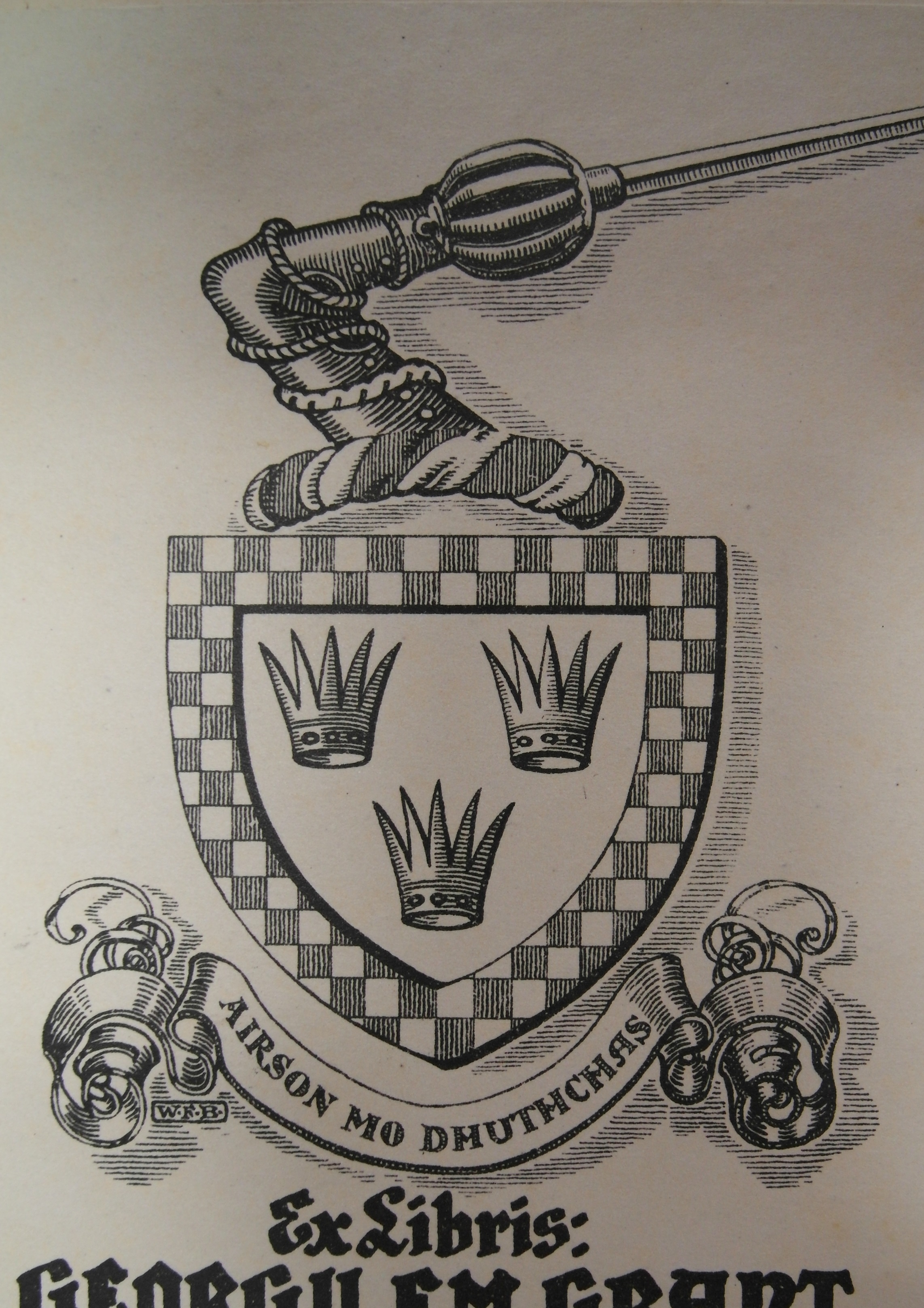 The property has been kept under stewardship by the Grants since the 16th Century. Consequentially, the bookplate serves a duel role. Not only does it mark the book in itself, but it also allows us to follow the Grant’s family lineage to a continuing, existing, Scottish estate.

This plain, armorial bookplate belonging to “Robert Launderson Wickham,” most likely dates somewhere from 1800-1900. It is a later version of the coat of arms, with less detail and dimensionality as a lord or gentleman would typically have.

Despite this, the design found in Priscilla Wakefield's book, The Traveller in Africa (...) remains specific to Wickham. His symbols (skull, dagger, scales and axe) coincides with the diagonal bend slashing through the middle as each symbol seems to represent someone in a military or service position. The symbol of the lantern in the center also indicates light, life, and spirituality.

We can also tell that Wickham lived in Devon, Pennsylvania—a place where we can also assume the book once was and establish part of its provenance. 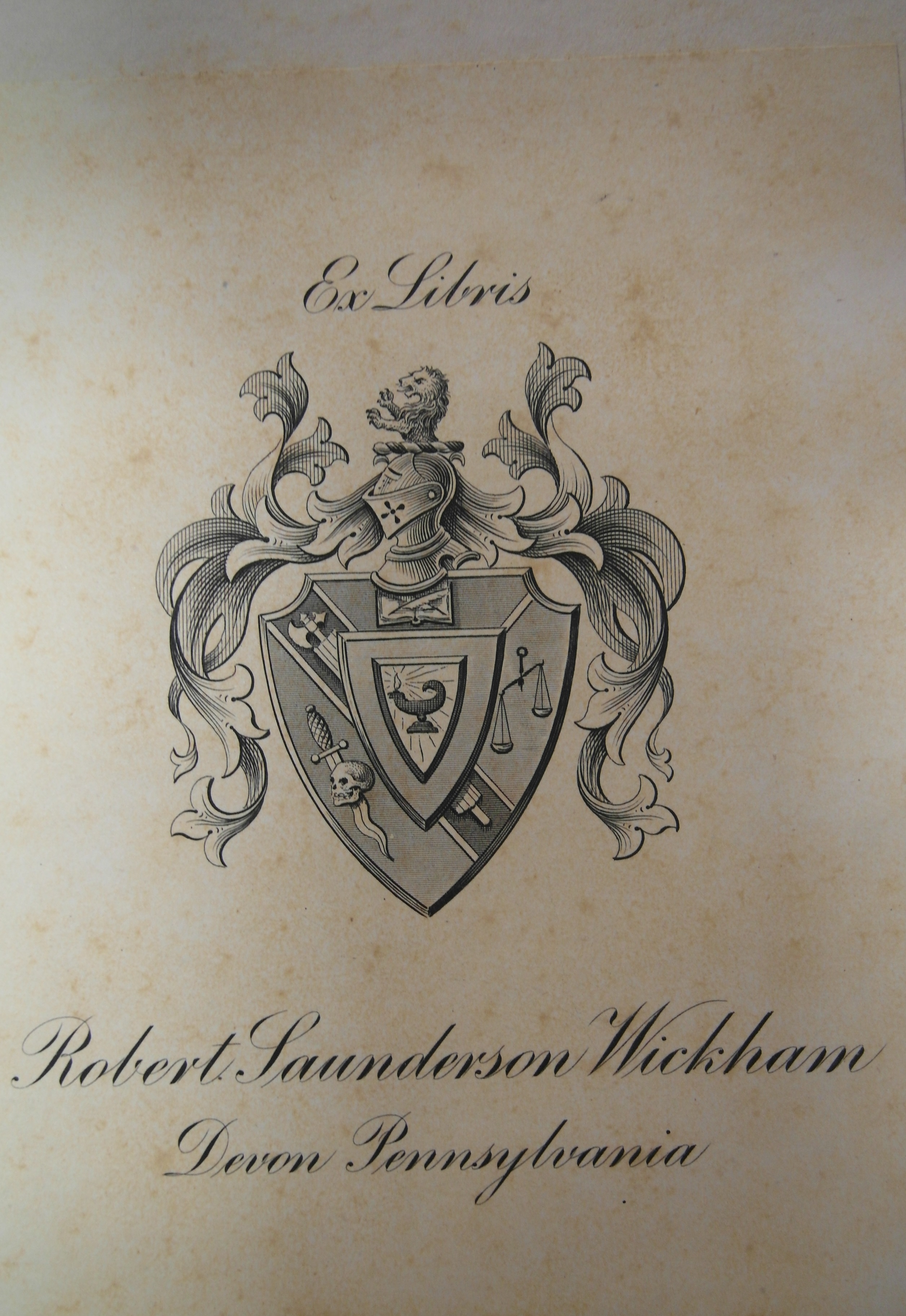 Discovered in the Memoirs of Friedrich Ferdinand and Count von Beust by Henry de Worms Pirbright Baron and also by Ferdinand himself, there isn’t much known about this specific bookplate.

George Baxter’s motto, “Vincit veritas” originates from his family heritage. As previously noted, sometimes it is possible for a motto to be passed along a generational line. In this case, the Baxter family received their motto (roughly translated as “truth prevails”). 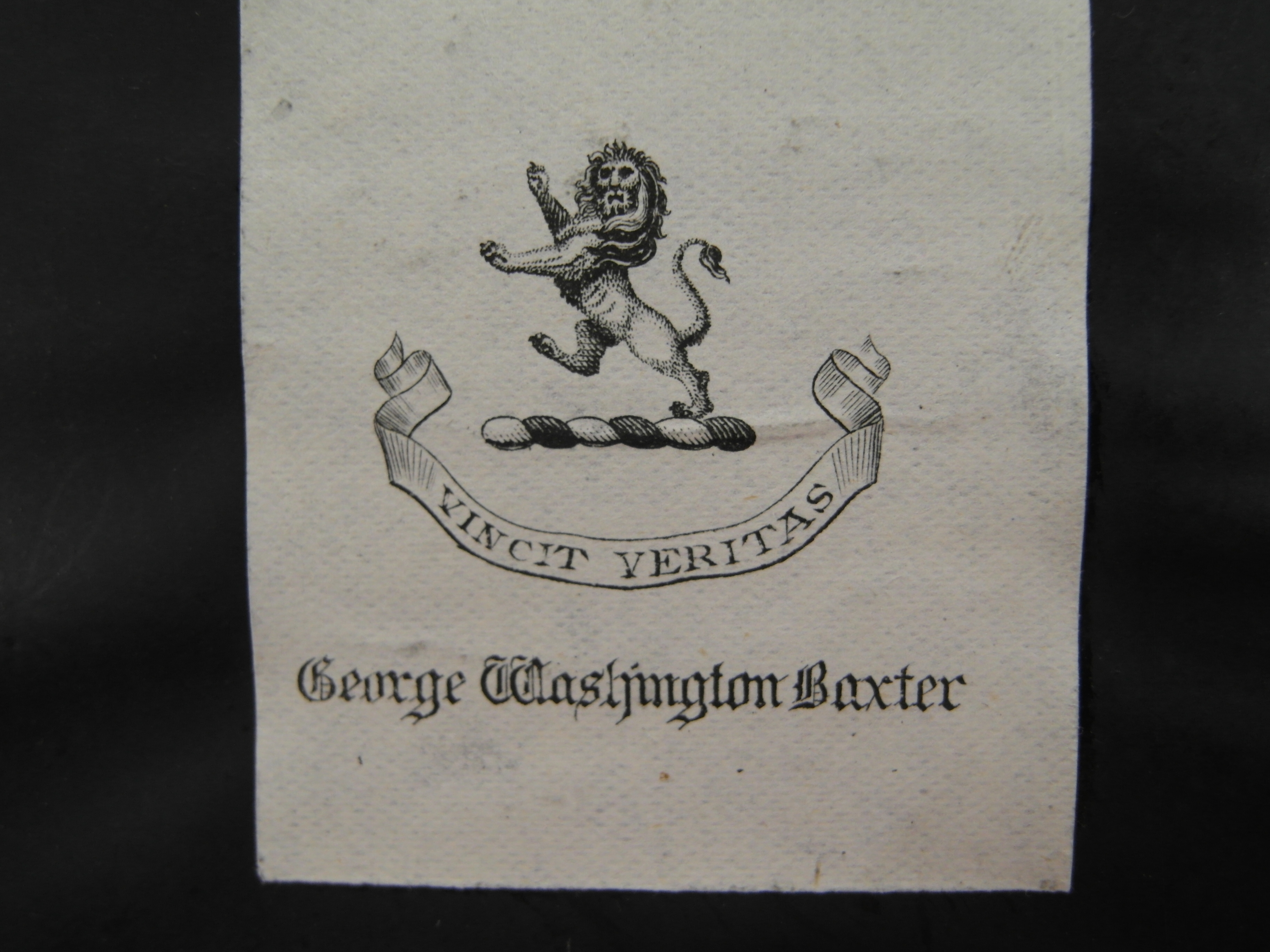 This bookplate seems to be a simple version of a coat of arms belonging to Frederick William Stopford. Incorporating the traditional and reworked shield, lion, and motto this inexpensive version still shows ownership and identity. While the family name is still unidentified, the motto roughly translates to: "Faithful to my unhappy country." 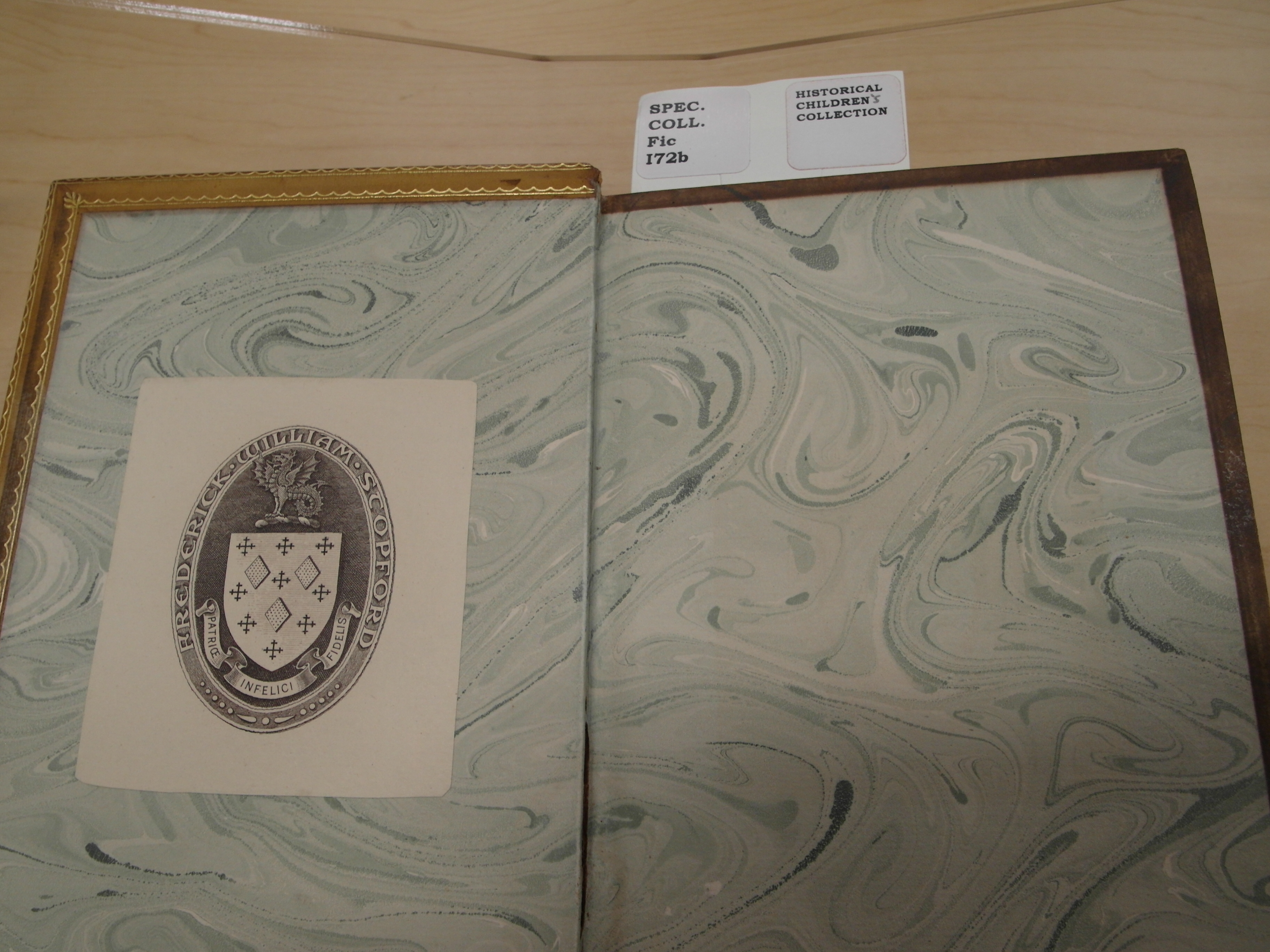