On October 16, 1937, Homecoming preparations at Slippery Rock State Teachers College went awry and the original North Hall dormitory caught fire. Everyone escaped the blaze but the building was a total loss. Ox roasting is dangerous business!

Original 16mm film transferred to laser videodisk by Dr. Mark Chase in 1991. Converted to MPEG (54 MB) by Melba Tomeo and Judy Silva in 2007 with the assistance of Brian Danielson, Instructional Technology. The laser videodisk is in the Slippery Rock University Archives.

"Oh boy! Is the school mad! ...all because of a little bonfire which was held on the campus right next door to the chapel on Saturday morning, October 16, at 5:20 a.m. It is understood that the Freshmen boys got sick and tired of collecting wood for the Ox Roast the preceding afternoon. To refresh themselves, they whipped downtown and bought a mess of wieners and marshmallows and set fire to North Hall to complete the toasting process."

Read more about this historic event in The Rocket, October 27, 1937. 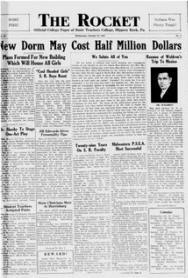 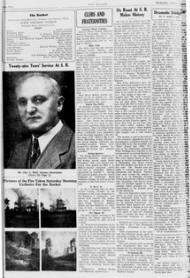 North Hall before the fire. . .

"After the way the girls handled themselves during the fire, the boys all agree that we have the finest bunch of girls that could be found anywhere. There was a cocoa-pour held in the Hut Sunday night in honor of the fire marshalls of the dormitory." The Rocket, October 27, 1937.

Read the eyewitness account of William B. Miller, son of President Charles Miller.

William was 13 at the time of the fire, and living in North Hall with his family: